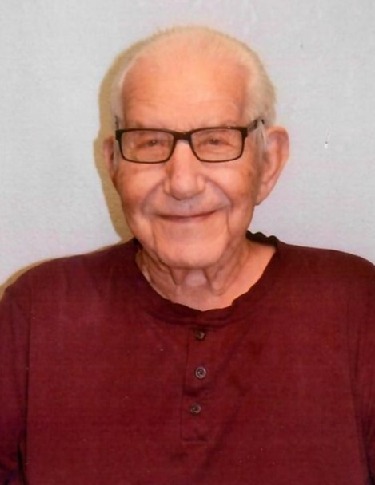 George William Grundel, 100, of Northwood, died on Monday, January 17, 2022 at the Lutheran Retirement Home in Northwood. Funeral Services will be held at 2:00 p.m. on Saturday, January 22, 2022 at United Methodist Church, St. Ansgar with Pastor Susan Thomas officiating. Burial will be at the Woodbury Cemetery, Lyle, Minnesota. Visitation will take place from 1:00 p.m. to 2:00 p.m. on Saturday at the church. George, son of Ludwig (Louie) Grundel and Susanna (Flick) Grundel was born on September 20, 1921 in rural Plymouth, Iowa. He was baptized on March 7, 1951 at the Methodist Church in Plymouth. The youngest of four children, George did not have a formal education past the 8th grade. He did, however, speak fluent German and loved to throw out a few sentences in conversation once and a while to see if anyone knew what he was talking about. He helped out on his family’s farm in rural Plymouth beginning at an early age which contributed to the strong work ethic that he had throughout his life. On January 30, 1943, George married the love of his life, Doris Chapin, at the home of her parents. They welcomed two sons, Dennis and Jerry, in the years that followed and farmed in the Nora Springs and Carpenter areas. A lifelong farmer, George also enjoyed playing the accordion. He was a member of The Kelly Band and loved to travel and perform with his fellow band members in his younger years. He often told the story about how by age 15, he had saved up $300 and could walk across the street and buy a brand-new car or buy an accordion. He said that his father told him that it was his choice, but that a car was not going to make him any money! George loved fishing, hunting, gardening, polka music, dancing, playing cards and spending time with friends and family. He was in the combine harvesting crops well into his 90’s as his love of the land never wavered. He was devoted to his wife, his children/grandchildren/great-grandchildren, caring for his land, and his community and was incredibly grateful for all of the good in his life. George always had a smile on his face, a story (or two) to tell of fond memories and a positive attitude and outlook on life. He was proud that he always looked younger than his age and loved to brag about his grandchildren and great-grandchildren. He is survived by his son, Dennis (Marjorie) Grundel; granddaughter, Deb (Tom) Blaeser; daughter-in-law, Susan Grundel; 8 great-grandchildren Madisyn, Brittney, Aiden, Ellie, Will, Zach, Logan and Mitchell and many nieces and nephews. He was preceded in death by his parents; wife, Doris; son, Jerry Grundel; grandson, Robert Grundel, twin great-grandsons, Ryan and Alex Baardseth and three siblings, Theresa Frahm, Roland Grundel and his wife, Pearl, and Edna Hoffman and her husband, George. A special thank you to the Lutheran Retirement Home staff for the care, love and kindness that they provided George during his time with them.