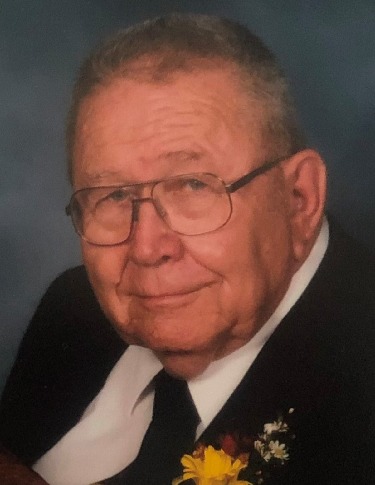 Richard (Mike/R.A.) Andrew Wold, 90, of Saint Ansgar passed away on May 11 at the St. Ansgar Good Samaritan Center. Funeral service will be Saturday, May 28, 2022 at 10:30 a.m. at St. Peter Lutheran Church, Toeterville with Rev. Lance Kittleson officiating. Burial afterward at First Lutheran Cemetery, St. Ansgar. Visitation is scheduled for Friday, May 27 from 5 to 7 p.m. at St. Peter Lutheran Church. R.A. was born on April 30, 1932 in Osage to Waldo and Mildred (Weber) Wold. He was baptized and confirmed at First Lutheran Church in Saint Ansgar. In his youth R.A. worked for local farmer, Art Tessman. Following graduation from St. Ansgar High School in 1950, he worked for H.L. McKinley & Sons dealership. In 1952 R.A. enlisted in the U.S. Navy and was stationed in San Diego at the Naval Air Station North Island. He served on the USS Kearsarge assault ship. During his military service he obtained the rank of Aviation Metalsmith 2nd Class and worked with the North Island Fire Department. After four years and an honorable discharge, R.A. returned to St. Ansgar and worked with his father in their service station until Waldo’s death in August of 1958. R.A. was united in marriage to Janet Darlene Anderson on September 21,1958 at Mona Lutheran Church. They were blessed with five children: Michael, Kelvin, Ivan, Dana and Sonja. The couple purchased Wold’s Service from his mother in October of 1958. Day or night and regardless of weather, R.A. and Janet always made customers a priority whether it was car repair, towing, farm tire repair or wheel business. Their values and ethics were passed along and continue as their family and dedicated and talented crew of past and current employees have helped grow the business from a local service station to a major manufacturer and distributor of agricultural wheels. R.A. was proud of his hometown and would love to talk about its history and people. He and Janet were actively involved in many community projects. He was a member of First Lutheran Church, the American Legion and the St. Ansgar Volunteer Fire Department. R.A. is survived by his wife Janet; three sons Kelvin (Lisa), Ivan (Melinda) and Dana all of St. Ansgar; and daughter Sonja (Scott) of Denver, IA. He felt blessed to be surrounded by many grandchildren and their families; Toni Kreitzer, Michelle Hills and Jess White (Michael’s children); Allison, Ryan, Erika and Abigail Wold (Kelvin’s children); Hanna and Sophia Wold (Ivan’s children); Courtney Dryer, Michael and Sarah Steege (Sonja’s children). He is also survived by seven great grandchildren, his sister Karen Ketelsen of Osage and many nieces and nephews. He was preceded in death by their son Michael; his parents Waldo and Mildred Wold; and his grandparents Margaret and Andrew Wold and George and Mamie Weber. R.A. was a firm believer in giving back to his community and to those in need. Memorials may be directed to the Wold Family Foundation, PO Box 129, St. Ansgar, IA 50472.