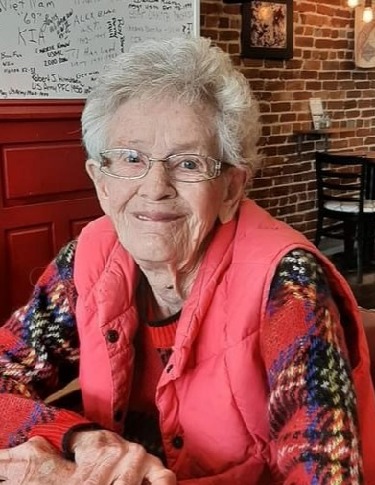 Mary Ann Schnell, born on April 9, 1936, went to live with our Lord and Savior on July 1, 2022. She was preceded in death by her mother and father Dora and Carl Conrad, brother Galen Conrad, sister Sandra Vitek, and husband Roger Schnell Mary Ann graduated from Little Cedar High School on May 18, 1954, and married Martin (Junior) North June 27, 1954. Together they had four children, Mark, Michael, Monte, and Melinda. She later married Roger Schnell on August 27, 1965 Her working years, beyond raising her four children, were filled by positions at the Maid-Rite restaurant, White Way Cleaners, & Fox River Mills from where she retired as a member of the shipping department. Mary Ann loved the holidays, especially Christmas, and having the family together for food and company. She enjoyed going to the cabin on the Cedar River and going for Cedar River cruises on the pontoon. She loved strawberry shakes, liked to garden, making a wonderful variety of canned goods from her harvest, and enjoyed hunting for morel mushrooms. Mary Ann was one of those unique people who could leave the past in the past and enjoy life as it unfolded. She is survived by a loving family that includes her: brother, Dennis (Debra) Conrad of Little Cedar; sons, Mark (Andrea) North of Mount Vernon, Iowa, Michael North of Little Cedar, Monte (Sheila) North of Mitchell, Mindy (Greg) Faas of Osage; grandchildren Monica (Tom) Meyer of Kensett, Iowa, Melinda (Scott) Hammond of Riceville, Iowa, Holly (Tim) Kruse of Staceyville, Iowa, Jake (April) Faas of Osage, Erika (Russ) Uthe of Ely, Iowa, Dana (Nana Ohene-Adu) North of Chicago, Jon (Arien) North of Osage, Stephany (Spencer) Teisinger of Osage, Justin North of Grafton, and Tara North of Riceville; and 20 great grandchildren Brandon & Collin Kilbourn, Andrew Morische, Spencer & Brooke Dvorak, Jaden, Jesse & Jaret Kruse, Alex, Abby & Bella Faas, Francesca & Charlotte Uthe, Cora Ohena-Adu, Braelyn North, Maddox Teisinger, Ella & Elijah Morris, and Mia Kilbourn. Mary Ann was a special woman, wife, and mother. She will be missed by all who had the chance to meet and know her.