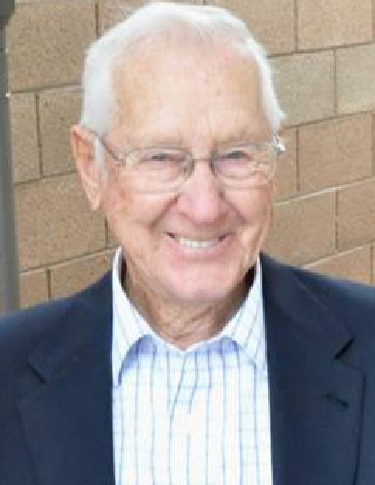 Ingemar Nils Georg (Persson) Pearson died peacefully on September 12, 2020 at Faith Lutheran Home surrounded by his loving family. Funeral services will be held at a later date. Ingemar Nils Georg Persson was born in Annerstad, Kronoberg Sweden on November 10, 1924 to Hulda Gustava Brorsson and Gustav Bertil Persson. Ingemar had two brothers and one sister. He was baptized and confirmed at the Annerstads Kyrka and his confirmation verse was Matthew 11:28-30. After graduation, Ingemar served in the Swedish military for two years, first with the Swedish calvary and later with a newly formed motorcycle brigade. After the military, he held various jobs including working as a mechanic at a Ford Motor Company shop. It was during his time as a mechanic in Ljungby that he met the love of his life, Elsa Karlsson, at the bakery in which she worked. He proposed and they became engaged in April 1947. In 1946, Ingemar’s uncle, Carl Swanson, came back to Sweden to visit his family. Carl had immigrated to the U.S. in 1905 and eventually settled on a farm near Madrid, Iowa. During his visit, Uncle Carl asked Ingemar to come to the U.S. and help with the farming. Ingemar agreed and in 1947 he sailed for America and started work as a farm hand. Realizing his nephew’s trademark ingenuity and willingness to do hard work, Carl rented a small farm to Ingemar. One year later, Ingemar sent for Elsa and she arrived by boat in April of 1948. Ingemar drove to New York to meet her and at Elsa’s insistence they found a Lutheran pastor who spoke Swedish to marry them. They were married in a church in Niagara Falls, New York on April 23, 1948. They honeymooned at the Falls before driving to Madrid. They made their home in Madrid, Iowa and farmed there for seven years. They both learned farming, learned English, became citizens, and became parents when Christie and Gary were born. In 1955 they purchased a farm and moved to Little Cedar, Iowa. They farmed, raised hogs, cattle, and chickens. Ingemar and Elsa worked very hard together, and eventually expanded by purchasing several additional farms over the years. By the time they retired, they owned and farmed 1400 acres. Ingemar was also was active in the community and served on the Little Cedar school board, and on the board of the Little Cedar Elevator. He was also on the church council of Our Savior’s Lutheran church in Osage. Ingemar and Elsa enjoyed traveling and along with friends, they explored the U.S. and Canada in their RV. They made trips “home” to Sweden every few years, and hosted their Swedish family members in the U.S. often. They began spending winters in Arizona in the early 1970’s and continued that tradition until 2018. They walked daily and golfed as much as they could, year round. They both had trophies commemorating their golfing talents. They loved to dance. In 2019, when Sam Crosser came to the nursing home to play, Ingemar requested their favorite dancing song, “Cab Driver” and Ingemar and Elsa (at that time 94 and 93) got up and danced! Ingemar and Elsa loved their family very much and were generous in so many ways. They were close to their children and all four grandchildren: Jenni Brandau Carlson, Kara Brandau Califf, Ben Brandau and Ingbritt Pearson. They knew and loved their eight great-grandchildren also: Annika, Linnea, and Luke Carlson, Emma, Andrea, and Samuel Califf, and Trenton and Tatum Brandau. Ingemar is preceded in death by his parents and his brothers Stig and Levi. He is survived by his sister Ingbritt Arvidson, his wife Elsa, their children Christie (John) Brandau and Gary (Cheryl) Pearson; grandchildren Jenni (Kyle) Carlson, Kara (Sean) Califf, Ben (Monique) Brandau, and Ingbritt Pearson, and his eight great-grandchildren.