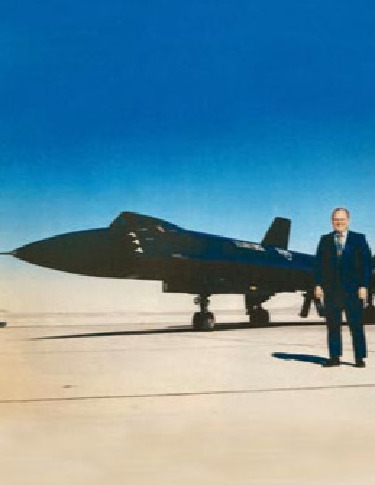 William (Bill) John Fox, born August 28, 1933 to Ralph and Catherine Fox of Orchard, IA. He went to be with the Lord on July 26, 2021. After Bill graduated from Orchard High School, he joined the US Navy during the Korean War where he was stationed aboard the USS Oriskany. After serving his country he attended Iowa State University where he earned his Bachelor degree in Electrical Engineering. In October 1955 he married Karen Frances Fink, of Orchard IA, and began a distinguished career within the Aerospace industry working with the Skunk Works division of Lockheed in California. Bill had many engineering roles working on the U2, SR-71 and F-117 programs. Bill was a family man and always made the time for his family. He was very active participating in the various activities of his children's lives. There were many times, if running late, he could be seen hitting baseballs to kids while still wearing dress shirt, slacks and dress shoes … he never wanted to disappoint anyone by not showing up to a commitment. He also enjoyed traveling, fishing, crossword puzzles and the many social events he attended such as Roadrunners Internationale, VFW, American Legion and Blackbird Laurels. After Bill retired, he and Karen returned to their home town of Osage IA. Throughout his retirement years Bill enjoyed giving engineering presentations to many people both young and old to help spark everyone to have an interest in STEM as he felt this was a very important way to help bring attention to the importance of engineering in today's world. During this time Bill also was very active on the committee to restore and open The Cedar Valley Seminary and the Leeman Educational Center, located in Osage, where he is honored with an exhibit of his career accomplishments to help promote STEM for all young children. Bill treasured his family and all the many friendships he established throughout the years, and was one that would never forget a face or name. As per Bill's wishes, the family will be holding a private graveside service. Bill was proceeded in death by his parents, wife Karen; siblings Ralph Fox Jr, Sister Pauline Fox and special friend Rita Mehman. He is survived by his children, Dorian, Doug, Mary, Lisa, Rick and their families along his sisters, Dolores, Ann, Judy, and brother Larry. Additionally, Bill had many grandchildren and great grandchildren, nieces and nephews. The family would like to thank the Faith Lutheran Home for the wonderful care they provided to our father over the past few months. The family requests that In lieu of flowers, please donate to the Leeman Educational Center or The Cedar Valley Seminary in Osage IA.