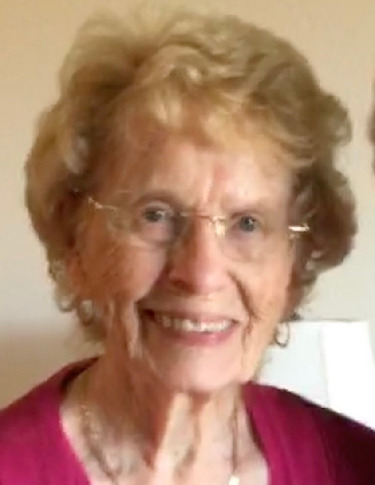 Constance "Connie" Naomi Bruesewitz passed away on Tuesday, August 3, 2021. Connie was born on January 12, 1925, on the Olsen farm between Kensett and Bolan, Iowa, the first child of Gilman and Edna (Anderson) Olsen. Later that year, Connie moved with her parents to Pomona/Claremont, California, now part of the greater Los Angeles area. Her brother, Gilman Jr. "Bud," was born four years later. Connie loved her life in California with her brother, parents, and adoring paternal grandparents. When not at school, days were spent playing in her family's orange orchards and attending "sneak previews" of movies, which often gave her glimpses of famous movie stars who appeared at the theater, including Charlie Chaplain, Jean Harlow, and Clark Gable. Her weekends included many trips to the mountains and ocean beaches. With the arrival of the Great Depression came the family's need to return to Iowa in the mid 1930's to take care of the farm where she was born. The initial shock of the move was softened by the fact that she was now close to her beloved maternal grandmother. Connie attended and was confirmed at Bethany Lutheran Church in Kensett, Iowa. She attended elementary school at Barton #2 and graduated from Kensett High School in 1942. She enjoyed her schooldays in Iowa and forged many friendships that would last a lifetime. Like most in the Greatest Generation, Connie's plans were altered by World War II. Thoughts of college and a desire to serve as an Army nurse gave way to working as a welding foreman at American Gas Machine Company of Albert Lea, Minnesota, where G.I. Pocket stoves were made. Connie never uttered a complaint about how the War changed her life's path. After the War, Connie re-acquainted with Eugene "Gene" Bruesewitz, to whom she was first introduced as a cheerleader for Kensett High while Gene played basketball for Grafton High. The attractive couple was married in Albert Lea after a blizzard struck on February 9, 1947. The California girl never grew to love midwestern winters, but the wedding day blizzard and many thereafter always produced smiles and laughs as she recounted the many joys of her re-adopted home. Connie and Gene shared 66 years of marriage together in Grafton, Iowa before Gene's death in 2013. They enjoyed countless Sunday afternoon drives, many wonderful trips, and a lifetime with a true soulmate. With marriage came parenthood and a close-knit family life that Connie treasured. She was always quick to express how proud she was of her children and grandchildren, and all of Connie's family and loved ones share a deep sense of pride in having been blessed to know and love her. Her family and many friends will remember and cherish the ease with which Connie laughed and enjoyed what came with each new day and adventure. Connie supported the family's farming business and the ownership and operation of Bruesewitz Motors. She is well known for her leadership in restoring the Grafton Heritage Depot, her decades of service to Emmanuel Lutheran Church, and her involvement with various community groups, particularly Grafton Community Action, the Bolan Schoolhouse and Cultural Center, and the Worth County Historical Society. For many years, Connie was the proprietor—with her long-time friend, Carol Dalluge—of an antique and gift store, the "This n' That Shoppe," in Grafton. She enjoyed reading, antiquing, quilting, traveling, and spending time with her family and friends. She was a skilled and prolific quilter. Connie is survived by her daughter Koral Rosendahl (Jim) of Okoboji, Iowa; her son Keven Bruesewitz (Sandy) of Grafton, Iowa; her daughter Jurene Wegner (Jeff) of Omaha, Nebraska; her grandchildren Raechel Bruesewitz Fossey (Luke) of Grafton, Iowa; Jimmy Rosendahl (Laura) of Estherville, Iowa; Holly Bruesewitz (Jake Kopriva) of Clear Lake, Iowa; Michael Wegner (Claire Zeorlin) of Asheville, North Carolina; Lauren Wegner of Omaha, Nebraska; her great-grandson Henry Rosendahl of Estherville, Iowa; and her niece Laurel Lagoni (Pete) of Fort Collins, Colorado. Connie was preceded in death by her husband, parents, brother, and sister-in-law, Lucy Olsen Studt. In lieu of flowers, memorials may be directed to Emmanuel Lutheran Church or the Grafton Heritage Depot.