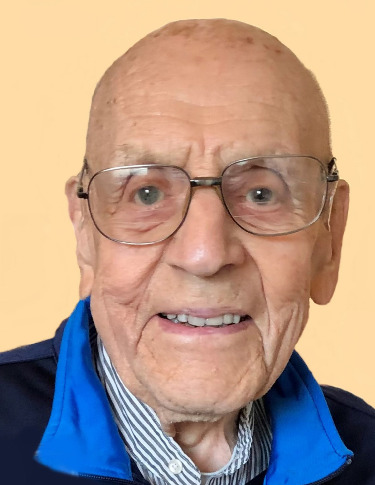 Lawrence Nickolas Goergen, age 100, walked through the gates of heaven on Tuesday, October 12, 2021. Born in Adams, Minnesota, on August 4, 1921, he grew up the son of Peter and Anna (Smith) Goergen. He had two brothers, George and Roman. As adults, when the three Goergen boys got together there was laughter and stories until all hours of the night. He proudly served his country in the U.S. Air Force during WWII. After the war he pursued an education at the Dunwoody Institute in Minneapolis, MN, although he was mainly a student in the school of life. He found love, marriage, and raised a family of four children. He was a wonderful husband and father. He spent most of his adult life in Osage, IA, where he enjoyed the company of many lifelong friends. He served in leadership positions at Sacred Heart Catholic Church, the Knights of Columbus, and the VFW. He was a grateful member of the Disabled American Veterans and other civic organizations. In Osage, he managed the Farmers Produce for many years. He then worked for the Iowa Beer and Liquor Control Department until he retired. After retirement he kept busy with many jobs and hobbies. He stayed involved and kept finding ways to help those around him. His heart was broken in 1985 when his wife of over 37 years, Marian (Cashman) Goergen, passed away. His heart again broke in 1998 when his oldest son, Patrick Goergen, was killed in a traffic accident. In 1990, he married his high school sweetheart, Florence Prescott. They were together for over 27 years until her death in 2018. Larry aged gracefully. He maintained a positive attitude propped up by a strong faith and a relentless sense of humor. He was a gentle soul who lived a good life. His last stop in life was at Northridge Village Retirement Community in Ames, IA where he was supported by many wonderful friends and a special guardian angel, Bob Miller. He is survived by his daughter, Mary (Kirk) Dau of Ames, IA; two sons, Terry of Crestone, CO, and Bill (Joan) of Waconia, MN; daughter-in-law, Barbara (Tom Flagg) Goergen of Waynesville, NC; nine Grandchildren and 17 Great Grandchildren. Other survivors include the children of his second wife, Gale (Deb) Prescott of Adams, MN; Louise Prescott, of Byron, MN; Mary (Ross) Knippel, of Half Moon Bay, CA; Joyce (Brian) Inberg, of Cedar Park, TX; and Helen (Mark) Wels of North Mankato, MN; stepdaughter-in-law, Fran Prescott of Boynton Beach, FL; and their children and grandchildren. A Funeral Mass will be held at 11:00 A.M. Saturday, October 23, 2021, at Sacred Heart Catholic Church, 1203 State Street, Osage, IA. Visitation will be from 10:00 A.M. to 11:00 A.M. before the service at the church. The service will be livestreamed. A time to greet the family and a luncheon will be held following the service. In lieu of flowers, memorial donations may be made to Disabled American Veterans.