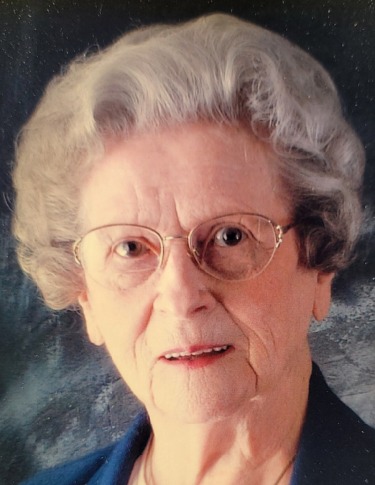 Marian was born September 26, 1915, on the family farm, near New Haven, Iowa, the daughter of Henry and Allie (Schweiger) McCarthy. She was raised on a farm northeast of New Haven. Marian attended grade school at St. Mary’s School in New Haven. She graduated from Owatonna High School in Minnesota and also attended a Teacher Training Course there, returning to Iowa, where she taught at rural schools in Chickasaw and Mitchell Counties. On October 30, 1939, Marian was united in marriage to Clement Pitzen of Stacyville. To this union, nine children were born. In later years Marian became interested in the antique business. In 1974, she opened her own shop in Stacyville. Marian was involved with antiques for over 25 years, selling in several malls and antique shows in Iowa and Minnesota. In 1988, she joined Terri Lynn’s Antiques in Osage, until they were forced to close due to damage from a fire in adjoining buildings in October 2001. Marian did extensive traveling to visit her family and took several extended tours to various areas of the United States, Canada and England. In July 2000, she moved to Evergreen Apartments in Osage, and later moved to Stacyville Community Nursing Home Assisted Living. She appreciated the care and concern of the staff at both facilities. Marian is survived by a daughter, Ann Williams of Westchester. IL; six sons, Charles (Emilie) Pitzen of Columbus, OH, Anthony (Sherry) Pitzen of Hamburg, IA, Leonard (Sue) Pitzen of Hawk Point, MO, Mark Pitzen of Hinesville, GA, Dr. Richard (Connie) Pitzen of Ottumwa, IA, and Leo Pitzen of Cedar Rapids, IA; nine grandchildren; nine great-grandchildren; and numerous nieces and nephews. She was preceded in death by her husband, Clement in 1991; her daughter, Mary in 1978; an infant son, Andrew in 1946; son-in-law, Richard Williams; brothers, Bernard, Edmund, Henry, Jr. and Thomas; and sisters, Mary Isabelle King, Grace Thornton, Patricia Detrick and Jeanette Gallagher. Schroeder Funeral Homes, Osage, 641-732-3706,