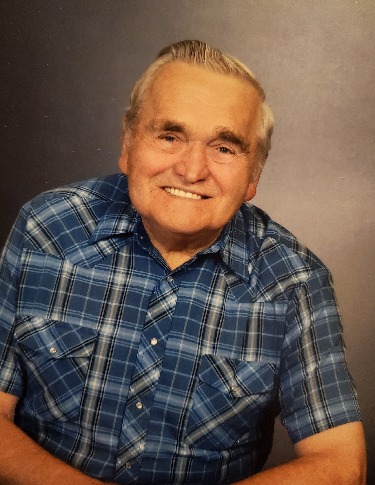 Jay was born on March 14, 1940 to Vern and Ellie (Schmidt) White. He graduated from Grafton High School in 1959. Jay’s number one passion was farming. After graduation, you could find Jay farming alongside his dad. He farmed in the Grafton area his whole life until retirement in 2010. After retirement he helped others with planting and harvesting. Jay had many side jobs throughout his life. Jay worked on the Milwaukee Railroad and spent numerous hours working alongside his brother, Art, on various carpentry projects. He drove school bus, always greeting the kids with a smile. He drove LP gas trucks for Thermogas, Worth County Co-op, and Dan Warrington. He was a member of the Grafton Volunteer Fire Department. He married the love of his life Jeanie Bork on August 26, 1961. Two beautiful daughters were born to this couple, Sandi and Cindi. They grew up listening to their dad whistling and singing with a smile on his face. Jay loved his Allis Chalmers tractors. He collected many models and was especially proud of his WD45 Diesel. He enjoyed tractor rides with Glen Wilde and Donnie Bottleman and their daughters Marcie and Tara. He also collected Allis Chalmers Toy Farm Equipment. He participated in the older men’s softball league, bowling league and pool league. Jay was an avid camper, taking the family with friends every weekend to various campgrounds where he found pleasure in drinking bloody mary’s and making fried potatoes for breakfast. He loved camping so much, he even went as far as turning his yard into a campground for all to enjoy. During the winters, Jay could be found snowmobiling with friends, family, and the “Thunder Chickens” club. At Christmas time he enjoyed going with a group of friends on their annual Candy Run and taking his family in the van and bus to see the area Christmas lights. He loved his golf outings, dressing up for St. Patrick’s Day and Halloween with his family, happy hour at the Gobblers Roost, eating and karaoke at Carpenter Bar & Grill, breakfast with family and friends, fishing trips to Canada, watching westerns on TV, and grilling turkeys for Grafton Turkey Days. In 2008 he traded his camper for a cabin on the Cedar River where weekends were spent with family and friends pontooning, playing yard games, watching outdoor movies, and sitting by campfires while telling stories and laughing. Many friendships and memories were made that he held close to his heart. But most of all he loved being with his beloved family. His face would light up and he was always smiling brightly around them. Vacationing with his whole family gave him the most happiness. From fishing in northern Minnesota, houseboating on the Mississippi, exploring the mountains in Colorado and Tennessee, visiting numerous theme parks in the U.S. including Florida and Wisconsin, the Bayou of New Orleans, all the way to the Caribbean Sea. All of these trips meant the world to Jay. Jay was a man of few words but his smile said it all. He was preceded in death by his: parents, Vern and Ellie White; parents-in-law, Alvin and Vivian Bork; sisters, Marjorie and Dorothy; brother, La Vern; sisters-in-law, JoAnn White, Susie White, Beverly Johanson; brothers-in-law, Forrest Urbatsch, Keith Bork, Richard Bork, Reubin Arzberger, and Arlo Johanson. He is survived by his: wife of 60 years, Jeanie; daughters, Sandi (Johnny) Duvall, Cindi (John) Mausehund; special daughter Kelli (Mike) Hemann; grandchildren, Josh (Chelsea) Duvall; Tristan Hanson (Sammy), Dexter (Ashley) Duvall, Jayden Mausehund; great-grandchildren, Mackenzi Duvall (Caleb), Madalynn Hanson, Jaxon and Silas Duvall, Tucker, Ryder and Zander Duvall; brother, Art White; sister, Gloria (Rube) Robeoltman; brother-in-law, Alvin “JR” (Deanna) Bork; extended family and friends, especially his “adopted” son Joe Warrington.