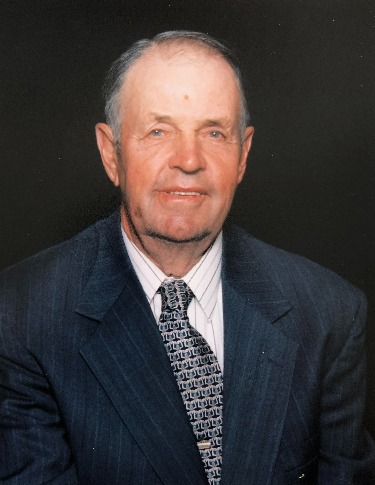 Ernest Clarence Hanson, 95, of Northwood passed away on February 26, 2022. He was born August 2, 1926, in Albert Lea, MN to Emil & Clara (Kvale) Hanson & grew up on the family farm in Brookfield Township in Worth County with siblings Elmer & Grace. After graduating from Northwood High School in 1943, Ernie was inducted into the Army December 7, 1944, and served in the Philippines & Japan as a cook & mess sergeant until honorably discharged November 15. 1946. Ernie began renting & farming the family land. He met his future wife Erma Dieterich of Toeterville while dancing at the Terp Ballroom in Austin, MN in May 1947. They were married on March 27, 1949, and raised 3 children Bev, Lonna & Ron. The farm was bought from Ernie's father in 1954 & feedlots & raising cattle began in 1956. He enjoyed buying cattle year-round at sales in Waukon, Decorah & South St. Paul. His Army experience helped make early beef producer banquets a success as he cooked & organized meals & was the original treasurer. Ernie & Erma were inducted into the Worth County Cattlemen's Hall of Fame in 2008. He was a township trustee, served on local election boards, 12 years on Northwood Elevator board (President & VP) & also a member of Bristol & then Sion Lutheran church and sang with the choir for many years. Ernie was a Brookfield Township 4-H leader & during the Worth County Fair, his roles would include working with county extension, weighmaster, and ear tagger for youth cattle projects. He enjoyed talking with people; pancakes, Norwegian foods, Culver’s fish sandwich, and casino buffet; dancing to waltzs & polkas with Mom & watching Mollie B Polka Party (& meeting Mollie in 2018); the playing card game 3-13 with family & 2 different games of solitaire every night; & reading local newspapers & farm magazines. Ernie had a great memory of family, friends & neighbors’ stories and was very proud of the Hanson Heritage Farm Award (150 yrs) in 2017. The past 3 years he called The Pines Assisted Living "Home" & greatly appreciated the wonderful care & friendships of staff & residents! Survivors include Bev (Roger) Dant of Forest City, Lonna Wantland of Chariton, Ron (Cindy) Hanson of Raleigh, NC; grandchildren Dan (Jessica) Dant, Luke (Melissa) Dant, Molli (Jason) Noel, Ben Wantland, Ryan (Kaitlin) Hanson. Great-grandchildren: Mariah & Elena Dant; Finn, Ike, Adeline, Nels, Noah Dant; Kaid, Levi, Jude Noel & overdue baby boy Hanson along with nieces, nephew, other relatives & friends. Ernie was proceeded in death by his wife Erma (2010), parents Emil & Clara, brother Elmer (Julia), sister Grace (Palmer) Heltne; Erma's parents Ervin & Ella Dieterich; Nephews Jerry Hanson, Everett (Kathy) Hanson; & son-in-law Larry Wantland. In lieu of flowers, memorials are suggested to Peace & Power (1st Lutheran Albert Lea), Eagles Cancer Telethon, The Pines Assisted Living, or the charity of your choice.