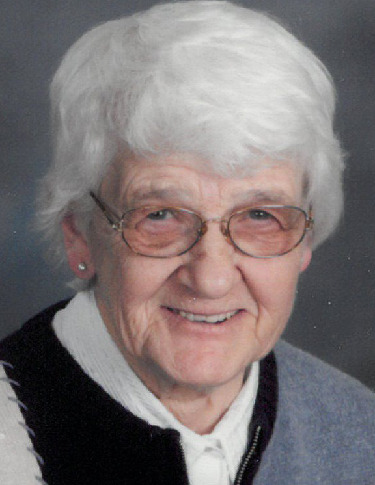 Kathryn Clara Tabbert, age 91, of Osage, passed away peacefully on Wednesday, April 7, 2021, at the Faith Lutheran Home in Osage. Funeral services will be held 10:30 a.m. Monday, April 12, 2021, at St. John's Lutheran Church, 1202 - 390th Street, west of Osage, in Rock Township, with Rev. Roy Ott officiating. Mask are required for services. Burial will be in St. John's Cemetery. Visitation will be from 2:00 to 4:00 p.m. Sunday at the Champion-Bucheit Funeral Home in Osage. Kathryn was born June 26, 1929, in the family home near Alexander, the daughter of Fred Sr. and Grace (Dirksen) Wenzel. She attended school in Alexander. Kathryn was united in marriage to Eldred Tabbert on April 6, 1952 in Alexander. The couple lived in Mitchell County where they farmed. Eldred died July 2, 1987. Kathryn was a member of St. John's Lutheran Church. In 1985 Kathryn took on the raising of two of her grandsons, Jon and Josh. She enjoyed gardening, growing flowers, canning fruits and vegetables from her garden, playing cards and collecting spoons from her travels. Most of all she enjoyed spending time with her family. Kathryn is survived by her three daughters, Denise Tabbert, Darlene (Mike) Huemann both of Osage and Donna (Merle) Johnson of Lake Mills; four sons, Dale Tabbert of Osage, Duane (Robin) Tabbert of Grafton, Dwight Tabbert and Darwin (Diann) Tabbert both of St. Ansgar; 16 grandchildren; 29 great-grandchildren and one on the way; siblings, Mary Servantez of Mason City, James (Joyce) Wenzel of Alexander, Lily Dippel of Belmond, Robert (Carolyn) Wenzel of Alexander, Gladys (Chuck) Vancura of Jackson, MN, Phyllis (Don) Ash of Grundy Center; and sister-in-law Mildred Wenzel of Belmond; and many nieces and nephews. She was preceded in death by her parents; husband, Eldred; father and mother-in-law, Albert and Edna Tabbert; daughter, Dianne in 1985; great grandson, Jacob Scott Tabbert; brothers, George and Fred Jr.; sisters and brothers-in-law, Evelyn and Donald Lesch, Tony Servantez and Mae Ferne Wenzel.