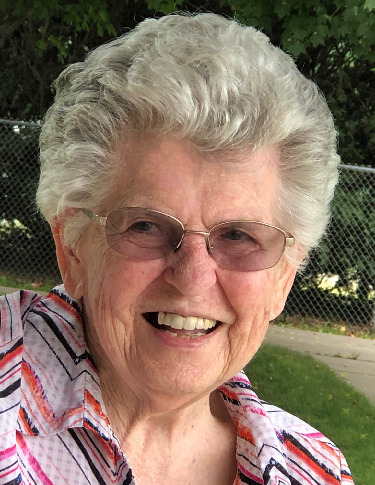 Mildred L. Herman, age 96, of Osage, died Thursday, September 30, 2021 at Faith Lutheran Home in Osage. Funeral services will be held at 3:00 p.m. Friday, October 8, 2021, at Immanuel Lutheran Church of Klinger in Readlyn, Iowa with Pastor Bruce Kaltwasser officiating. Burial will be in the Immanuel Lutheran Cemetery. Visitation will be held from 1:00 to 3:00 p.m. Friday at the Immanuel Lutheran Church. Mildred was born June 16, 1925, in Aberdeen, South Dakota, the daughter of Rudolph and Geneva (Sproul) Loeffler. Mildred was united in marriage to LaVerne Herman on March 18, 1945, at the Immanuel Lutheran Church in Readlyn. To this union 5 children were born. Katheryn, LaVern Jr., Margaret, James, Karl. Mildred attended Upper Iowa University, the University of Northern Iowa, and graduated from Wartburg College in 1973. She later received her Master's Degree from UNI. She was a teacher and started her teaching career at Country School Franklin #7 in Bremer County. Mildred continued her teaching career in the following schools and communities, Immanuel Lutheran in Readlyn, Oran Elementary and Oran-Fairbank Junior High both in Oran, Dunkerton Elementary in Dunkerton, Sumner Elementary in Sumner as a Special Education Teacher and then at Washington Middle School and Lincoln Elementary both in Osage until her retirement. She was a member of the Immanuel Lutheran Church in Readlyn, Immanuel Lutheran Church in St. Ansgar and Trinity Lutheran Church in Osage. She was an active member of the LWML at the local level and on the state level. She enjoyed sewing, quilting, gardening, her flower beds, traveling and the Sweet Adeline's. Mildred's greatest joy was spending time with her children, grandchildren, great-grandchildren. Mildred is survived by her five children, Katheryn Reiher of Casa Grande, Arizona, LaVerne (Teri) Herman of Holiday Island, Arkansas, Margaret (Roger) Kistler of Olin, James (Celia) Herman of Dubai, United Arab Emirates, and Karl Herman of Osage; 16 grandchildren; 23 great-grandchildren; 3 great-great grandsons and several nieces and nephews. Mildred was preceded in death by her parents; husband, LaVerne in 1994; grandson, John Reiher in 1977, and son-in-law Loren Reiher in 2021; two brothers, Don (Stephanie) Loeffler and Ed (Zeta) Loeffler.