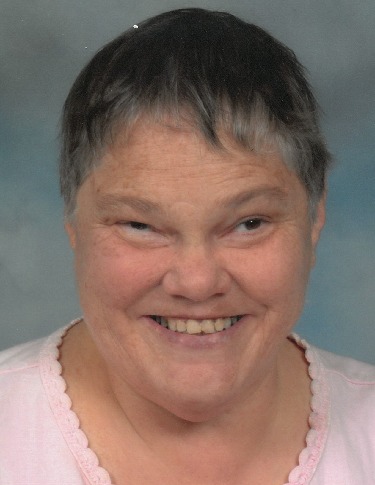 Judith Irene Johnson, age 81, of Stacyville, died , Thursday, April 7, 2022, at Osage Rehabilitation and Health Care Center in Osage. . Funeral Mass will be held at 11:00 a.m., Wednesday, April 13, 2022, at Visitation Catholic Church, Stacyville, with Father Raymond Burkle officiating. There will be a gathering of family and friends prior to the service from 10:00 – 11:00 a.m. on Wednesday at Visitation Catholic Church in Stacyville. Cremation will take place after the service. Inurnment will take place at a later date at the Visitation Cemetery. Judith was born November 18, 1940, at Fairview Hospital in Minneapolis, Minnesota, the daughter of Walter R. Johnson and Gertrude E. (Breedlove) Johnson. She was one of four children. Judith was born blind. She attended John Marshall High school in Southeast Minneapolis. Judith worked in a factory setting for five years. In 1966 she started at the University of Northwestern in St. Paul, MN with a major in psychology. In 1989 she graduated with a Medical Office Management Diploma from Minnesota Institute of Medical and Dental Careers, Inc. in Minneapolis. Judith worked in Transcription as a blind Dictaphone typist, six years as an administrative secretary at St. Paul Society for the Blind. Though diagnosed legally blind at birth, Judith regained some eyesight. From 1981-1994 a doctor fitted her with microscopic and telescopic glasses. Later Judith received a prescription for glasses where the main lens was for distance visioning and microscopic bifocals for reading and crocheting. In 1999 cataract surgery in both eyes, with this her vision improved even more. Her hobbies included crocheting, living her Catholic faith, reading, listening to music, and playing her home organ. Judith was a kind and gentle soul who welcomed those she met with a smile and a word of encouragement. Judith moved to Stacyville in 1994. In February 2015 she moved to Osage Rehabilitation and Health Care Center. She is preceded in death by her parents, and her sister Joanne Peterson. She is survived by her special friends, Sister Millie Leuenberger OSF, Dort Schmidt, Barbara Ann Brumm, Roger Brumm, Ally Bartholomew, and Al Brumm. The family would like to thank St. Croix Hospice and Osage Rehabilitation and Healthcare Center Staff. Schroeder Funeral Homes, Osage, 641-732-3706