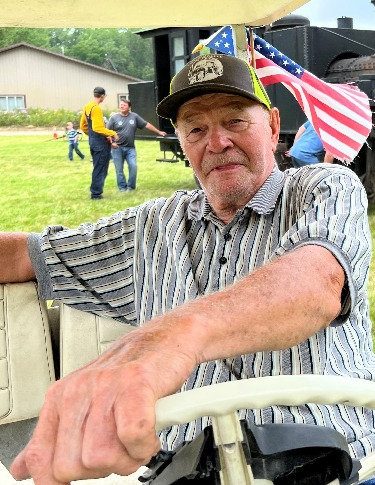 Merrill F. Johnson, 90, of Osage (Meroa), IA passed away on Saturday, August 13, 2022 at home after enjoying one of the best days of his life. Visitation will be held Friday, August 26, 2022 at Rock Creek Lutheran Church, 3269 Foothill Avenue, Osage, IA from 4 to 7 pm with funeral services on Saturday, August 27, 2022 at 10:30 am with inurnment at the Rock Creek Cemetery. Merrill was born at home in Cedar Township on September 1, 1931 to Herbert and Frances (Schmidt) Johnson. He attended Cedar #7 school in Meroa and graduated from Osage High School in 1949. Merrill served in the Marines, Marine Air Group Unit, from 1951 to 1953 and served on the USS Bennington during the Korean war. October 16, 1954 he married Muriel Bratland and they had four children. He was a jack of all trades and enjoyed various types of work, including Rock Creek Garage, Rock Creek Tree Service, Rock Creek Building Salvage, and Kwik Serve. Merrill was a member of the Osage American Legion Post #278 in Osage, serving on the Memorial Squad and he was a very active member of the Mitchell County Historical Society helping the Smolik Brothers to establish the Cedar Valley Memories Power Show. He spent his entire life collecting and preserving history. He was a life-time member of Rock Creek Lutheran Church and served as the cemetery sexton for 63 years. He is survived by his wife, Muriel, children, Krista (Roger) Koschmeder, Wayne (Jane) Johnson, Karla (Dwight) Mitchell and Robert Johnson. He is also survived by his grandchildren, Karina (Kristopher) Hearn, Kaitlin (Kody) Zimmerman, Jason (Katie) Johnson, Jeremy (Polly) Johnson, Jamie (Makaila Eickhoff) Johnson, Brodie (Heather) Mitchell, Jordon (Hilary) Mitchell, Alex (Matt Jakoubek) Johnson and Amy Johnson, and 16 great grandchildren. He is also survived by a brother, Dean Johnson, sister-in-law, Grace Johnson, and brother-in-law, Kenneth Bratland and many nieces and nephews. He was preceded in death by his parents, parents-in-law, brothers, Marvin and Norbert Johnson, sister-in-law Mary Johnson, sister-in-law and brother-in-law, Verna and Hayden Williams and sister-in-law, Carol Bratland. Schroeder Funeral Homes, Osage, 641-732-3706