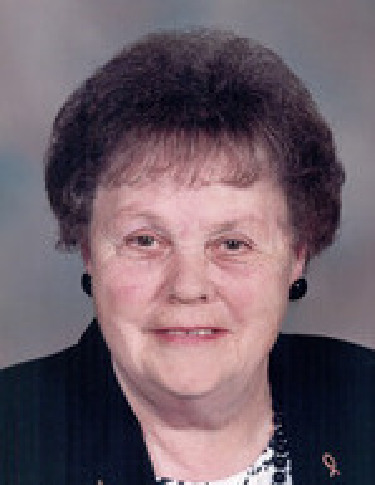 Margaret M. Berry, age 96, of Osage, died August 5, 2020 at Mitchell County Regional Health Center. A private family Memorial Mass will be held at a future date in Osage at Sacred Heart Catholic Church, with Father Ray Burkle officiating. Inurnment will be at St. Mary’s Cemetery in Greene, Iowa. Margaret was born May 13, 1924 near Lawler, Iowa, the oldest child of Victor and Beatrice (Kraman) King. She graduated from Lawler High School in 1942 and from Mercy Hospital School of Nursing in Iowa City, as a registered nurse in 1945. Margaret married Ray K. Berry on September 5, 1945 at Mt. Carmel Catholic Church in Lawler, Iowa. To this union, four daughters were born: Jeanne, Donna, Janice, and Pat. Ray and Margaret farmed near New Hampton for many years. The four daughters have fond memories of growing up on the farm, and Margaret preparing delicious meals. She was always ready with a helping hand, a trait she maintained for her entire lifetime. Growing up on a farm during The Great Depression taught Margaret about doing without. She did not want others to experience this, and always went above and beyond when providing everyone’s favorite food and cooking of old family recipes that she provided at all the family get-togethers. No family gathering was ever complete until the group photos had been taken! Margaret was employed as a geriatric nurse in local nursing homes from 1967 until her retirement in 2001. She was a member of St. Joseph’s Catholic Church in New Hampton, and after 1973, was a member of Sacred Heart Catholic Church in Osage. Spending time with family, traveling, photography, and reading were Margaret‘s passions. She took each of her grandchildren on an individual vacation when they became teenagers. In 1982, she and her daughter Janice, took the four oldest grandchildren on a 25 day driving trip of over 5000 miles traveling through the western United States, taking pictures at every important sight along the way! Margaret instilled her love for travel in many of her grandchildren and great grandchildren. Over the years, Margaret and Janice traveled to most of the United States, and took trips to Alaska, Hawaii, Europe, Australia, and New Zealand. She enjoyed celebrating her birthdays with a vacation or dinner cruise with family. Margaret’s favorite saying was, “We have a lot to be thankful for”. The family has been truly blessed to have such a wonderful Mother, Grandmother, and Great Grandmother! Margaret is survived by four daughters; Jeanne (Merlyn) Zipse of New Hampton, Donna Huffman of Waterloo, Janice Berry of Osage, and Pat (Ron Larsen) Berry of Shellsburg; six grandchildren Lori (John) Sheehy of Mosinee, WI, Paul (Angelica) Huffman of Gilbert, AZ, Jerry Zipse of Frederika, IA, Brad (Britney) Huffman of Cedar Falls, IA, Angie (Matt) Moos of Minneapolis, MN, and Alex (Andrew Malley) Huffman of Gilbert, AZ; and seven great grandchildren. She was preceded in death by her parents, her husband Ray K. Berry in 2000, brother and sister-in-law Hugh and Marvie King; and son-in-law Mike Huffman.