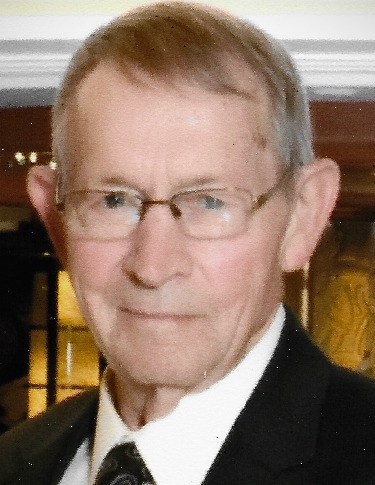 On Thursday, February 18, 2021, Dick passed away at Faith Lutheran Home in Osage under Hospice care. He was born December 7, 1935 on a farm outside Tama, Iowa. The son of Leonard and Anna (Ledvina) Formanek married Marilyn (Torneten) Formanek on August 1, 1959. Dick was preceded in death by his parents and brother Robert Formanek. Dick attended school at Otter Creek #1 in Tama County through 8th grade, participated in athletics at Tama High School before going on to Iowa State Teachers College (UNI) in 1953. Dick competed in the NCAA wrestling tournaments and was named Little All-American in football. In 1956, Dick was the only player in UNI history to compete in every play of every game for an entire season. After graduating in 1957 he taught for 11 years at Thomas Jefferson in Council Bluffs and Fort Dodge High School where he was head wrestling coach and assistant football coach. Dick then earned his Masters Degree at OSU in Stillwater, OK in 1969. Dick and Marilyn with their three children moved to Osage in 1969 where Dick taught Physical Education and later Biology. He was head wrestling coach for 6 years and assistant football coach for 21 years retiring after 28 years at Osage High School. He received many coaching honors and was recently presented with a plaque inducting him into the Osage Athletics Hall of Fame. Dick was strong in his Catholic faith and a member of the Sacred Heart Catholic Church where he served as usher and volunteered at church activities such as the Fall Festival. Along with coaching and teaching, Dick enjoyed playing golf, pheasant and turkey hunting, fishing and was an avid deer hunter. Over the years Dick and Marilyn enjoyed traveling including trips to Australia, New Zealand, South Korea, Europe, South America, numerous cruises as well as visiting their children in Arizona, Michigan and Arkansas. After retirement, they enjoyed spending the coldest of the Iowa winter months in Arizona with their son Bill. In addition to his wife Marilyn, Dick is survived by his son William (Bill) Formanek, son Michael (Mike) Formanek and wife Jill Formanek - granddaughters Skye Formanek, Sophie Formanek, Lilly Formanek, Lexie Formanek and daughter Deborah (Debb) Formanek and her husband Tracy Englebrecht. Services: Funeral Services will be held at 11:00 AM on Tuesday, February 23, 2021 at Sacred Heart Catholic Church. Masks are required. Family only interment will be at Sacred Heart Cemetery directly following funeral service. In lieu of flowers, the family requests that memorial gifts be made in memory of Mr. Formanek to Mayo Clinic for Hematology. Donations can be made by phone, online or by mail. By Phone – call 1-855-852-8129 to talk with a Gift Processing Associates who can take a donation securely over the telephone. Online – Visit Mayo Clinic Website, under "Tribute Information" please indicate the gift is in memory of Mr. Formanek Mail – Checks can be written directly to Mayo Clinic and mailed to: Mayo Clinic Department of Development 200 First Street SW Rochester, MN 55905 In the memo line of the check or on a separate please indicate that the donation is in memory of Mr. Formanek