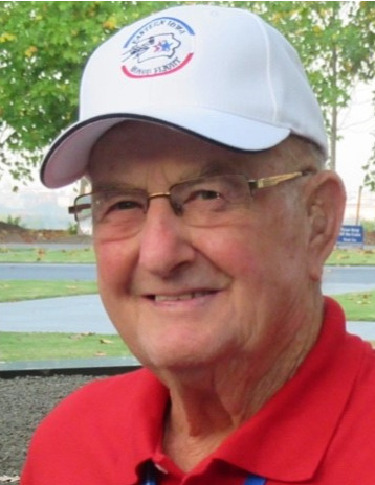 Willard H. Blake, 89, died June 5, 2021 at the Faith Lutheran Home, in Osage. A funeral service will be held at 10:30 a.m. on Thursday, June 10, 2021 at Visitation Catholic Church, Stacyville with Father Raymond Burkle officiating. Visitation will be held on Wednesday evening from 5:00 to 7:00 p.m. at Visitation Catholic Church. Burial will be in the Visitation Cemetery. Willie was born on November 12, 1931 to Ray and Helen (Durben) Blake, the oldest of six boys. He grew up on a farm outside Stacyville, Iowa during the Great Depression and graduated from Visitation High School in 1949. He served in the U.S. Army during the Korean War from 1952-1953 as an infantryman, and fought in the Battle of Pork Chop Hill. In 1954, he married his childhood sweetheart, Germaine Mayer, and they raised three children, Debra, Diane and Mark. He worked at the Stacyville Cooperative Elevator for 41 years from 1954-1995, serving as fertilizer specialist and assistant manager for a time. He enjoyed all aspects of agriculture and especially working with farmers. After retirement from the elevator, he worked as a USDA grain sampler. He was active in the Stacyville community, elected to the city council for many years and volunteering as a firefighter. He was a member of the Visitation Knights of Columbus, Catholic Order of Foresters, and after retirement, he served mass and sang in the choir. In later years, he delivered Meals on Wheels to community members. He was a longtime member of the American Legion Post #569 and participated in the color guard at parades and funerals. In 2016, he and son, Mark, flew to Washington, D.C. On an Honor Flight for veterans of the Korean War. Spending time with family and conversing and joking with friends gave him great joy. He also loved participating in sports, and his enduring passions were baseball, hunting and golf. He played shortstop on the Stacyville town team starting in high school and quitting only after spraining his ankle sliding into second base in his late thirties. Every fall, he could be found walking the fields hunting pheasants, and he helped raise money for habitat preservation participating on the Mitchell County Pheasants Forever Board. In 1969, he became a founding member of the Cedar River Golf Course in Adams, MN, where he golfed through the summer of 2020. He said his four hole-in-ones on the course were pure luck, but everyone who knew his abilities understood there was a fair amount of talent involved. He also loved to play card games, especially 500 and cribbage at the Legion Hall or with family members. In quiet moments, he was an avid reader of mystery novels. Willie is survived by four brothers: Donald (Jean) of Tenerife, Canary Islands; Charles (Myrna) of Bella Vista, AR; Walter (Maggie) of St. Ansgar, IA; Roger (Betty) of Stacyville, IA; and sister-in-law, Patricia of Maple Grove, MN; his three children: Debra Blake (James Alvey) of New Brighton, MN; Diane (Ron) Peterson of Lakeville, MN; and Mark Blake of Polk City, IA; his grandchildren: Erick (Luisa) Peterson of St. Paul, MN and Adam Peterson of Minneapolis, MN; two great-grandchildren: Sophia and Andre´ Peterson, and numerous nieces and nephews. He was preceded in death by his parents, Ray and Helen; wife, Germaine; brother, Glenn; and sister-in-law, Sharon. In lieu of flowers or gifts, donations may be made to the Stacyville American Legion Post #569, Mitchell County Pheasants Forever, or the Mitchell County Regional Health Center.