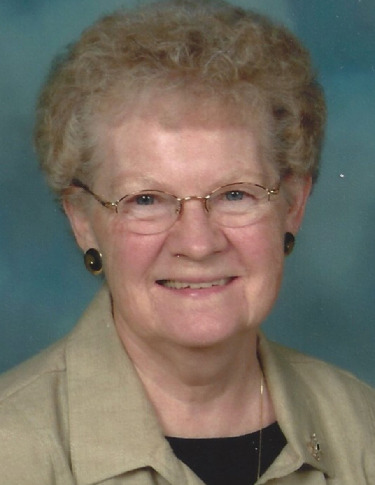 Dorothy Jean Gerbig, age 86, of Osage, moved to Heaven on Sunday June 6, 2021, at 10:20 p.m. in Osage, Iowa. She passed away peacefully in her sleep at Osage Rehabilitation Center where she lived for the last 5 years. Visitation, Funeral and Burial will be on Saturday June 19, 2021. Visitation will be at 1 p.m. and Funeral Services will be at 3 p.m. Both will be held at Champion Funeral Home in Osage. Father Ray Burkle will be officiating. Burial will be held in the Osage Public Cemetery immediately following the funeral. *No luncheon provided. Dorothy was born March 29, 1935 in St. Ansgar, the daughter of Albert and Irma (Kuehl) Adams. She was baptized and confirmed at Visitation Catholic Church in Stacyville. She graduated from St. Ansgar High School in 1952. Dorothy married Melvin Gerbig of Stacyville on May 12, 1979 at the First Congregational Church in Orchard. They lived in Osage for their married life of 36 years. Dorothy worked in grocery stores in Milwaukee, WI for 12 years. She also worked at the Old Marr Knitting Mill and Fox River Mills for a total of 12 years till her retirement. She was a member of Sacred Heart Guild for 35 years, VFW Auxiliary, Bible sharing group and study group for many years. Dorothy enjoyed sewing clothing and doll clothes, crocheting, reading, movies, playing 500 in a number of card clubs. Dorothy and Melvin enjoyed many years of camping with family and friends. They also enjoyed many years of Christmas Decorating the outside of their quaint home in Osage. They won several awards from the town for these amazing decorations. She enjoyed spending time with her children and grandchildren. Dorothy is survived by her: children, Timothy Lievrouw of Albert Lea, MN, David (Claire) Lievrouw of Saint Germain, WI, Doreen (George) Niedermayer of Waukesha, WI, Dennis (Susan) Lievrouw of Germantown, WI; step-children, Sheila (Pat) Hennessey of Osage, Linda Abben of Charles City, Doreen (Tracy) Klemesrud of Kennewick, WA, Ken (Joann) Gerbig of Mason City, Rod (Elaine) Gerbig of Stacyville, Karen (Ken) Nelson of St. Ansgar, John (Steph) Gerbig of Stacyville, Pam (Glen) Williams of Osage; 33 Grandchildren; 21 Great-Grandchildren; 1 Great-Great-Grandson; many nieces and nephews; brothers and Sisters, Rose Ellingson of Osage, Annette (Kenneth) Anderson of Rochester, MN, Suzanne (Ron) Krahn of Waco, TX, Alan (Cheryl) Adams of Osage. She was preceded in death by her parents; husband Melvin Gerbig in 2015; and 2 grandsons Michael and Robert Lievrouw.