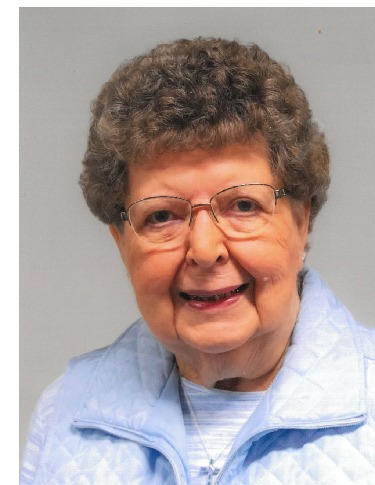 OSAGE — Janice E. Kirchgatter, age 84, of Osage, died Friday, December 17, 2021, at Mitchell County Regional Health Center in Osage. Memorial services will be held at 11:00 a.m. Tuesday, December 28, 2021, at Our Savior’s Lutheran Church in Osage with the Pastor Bryan Odeen officiating. Inurnment will be in the Sunset Rest Cemetery in Northwood. Visitation will be from 10 to 11 a.m. at the church. Janice was born December 8, 1937, in Worth County, Iowa, the daughter of Arthur F. and Pauline M. (Orman) Rasmussen. Janice attended country school at Deer Creek #6 K-7 grades, she started 8th grade in Northwood and graduated from Northwood High School in 1955. Janice was baptized and confirmed at Deer Creek Lutheran Church, Carpenter, Iowa by Rev Olaf Langhough, who also performed the marriage of Janice & Leland Kirchgatter on December 10, 1955. They later divorced in 1979. Two sons were born to this union, Scott Kevin in 1963 and Mark Lee in 1966. Janice was employed as a secretary at Yelland & Hanes in Mason City until her marriage, when she moved to St Ansgar and took a job as secretary at the Extension Office in Osage for 3 ½ years. Then she worked as a teller at the Citizens State Bank in St Ansgar for 4 ½ years before deciding to stay home and raise her sons. After 5 years she went back to work at the St Ansgar State Bank and worked 30 more years before moving to Lime Springs. Then she worked 2 ½ years at the Wykoff State Bank in Wykoff, MN, retiring at the end of 1999. During this time, she joined St Paul’s Lutheran Church and Senior Citizens in Lime Springs where she made many very good friends. After 10 years on the farm near Lime Springs she decided to sell the farm and move back to town, so she bought a house in Osage, Iowa and moved there in October 2007, where she has enjoyed retirement to the fullest. She was active in Senior Citizens, enjoyed playing cards, and joined Our Saviors Lutheran Church, where she was a member of a Circle. Janice also went on several bus trips with CUSB Bank VIP Club and First Citizens Bank Heritage Club. She was a member of the Concert Series and went to several events at the CRC in Osage. She made many lasting friendships in Osage. Janice was an avid supporter of the Minnesota Twins and Iowa Hawkeyes. Janice is survived by two sons, Scott (Mona) Kirchgatter of Anthon, IA and Mark Kirchgatter of Grafton, IA; two granddaughters, Allison (Matthew) Bulanda of Arlington, Texas and Megan (Josiah) O’Polka of Bondurant, Iowa; and a special cousin Mike (Clarice) Leraaen of Charles City, along with several other cousins and friends. Janice is preceded in death by her parents and grandparents. Champion Funeral Home, Osage, 641-732-3706, www.schroederfuneralhomes.com