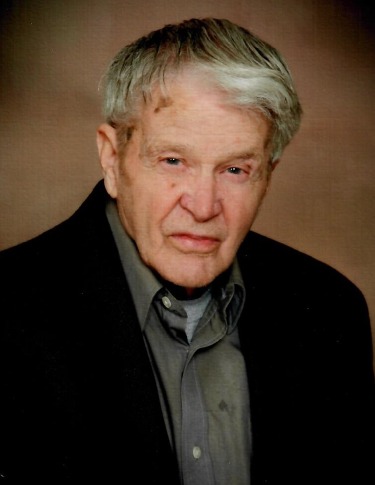 Paul “Unk” Ludvig Eldon Hanson, 95, of Northwood, met his heavenly father on Saturday, March 12, 2022 at the Lutheran Retirement Home. Paul was born on March 10, 1927 the son of Peder and Hattie (Preston) Hanson. He grew up on the family farm just west of Deer Creek. He attended school at the District 59 School in Freeborn County, and then Northwood High School graduating in 1944. He always said these years included the twelve best days of his life. During his youth, he was a proud and active member of the Myrtle 4-H club, and enjoyed playing in the Northwood High School Band under the direction of L.T. Dillon. Upon graduation from high school, Paul worked on the family farm. He would say, “All I wanted was a new barn, but all the money went to St. Olaf [for his sisters’ college].” If you asked him, he would tell you that he worked with his brother. If you asked what his brother did, he would respond, “Not a damn thing.” He also played on the Deer Creek Valley softball team as a first-baseman and was a great batter. Announcer Charlie Jones would say, “And here comes Slugger Hanson.” Paul was a life-long member of Deer Creek Valley Lutheran Church where he looked forward to singing in the choir. He was the cornerstone of the tenor section and would frequently say at rehearsals, “Okay, that’s enough of that one. We don’t want to wear it out.” He also loved participating in Luther League. He moved into town in 1984, and retired from farming in 1989. During his retirement, he was an avid reader and enjoyed the company of his housecat, who had a very unique name and special place in his heart. Paul was active in his community serving for many years on the London-Deer Creek Cemetery Association. He was also a member of the Northwood Lions Club selling many rootbeer floats during his time. He delivered Meals on Wheels, and couldn’t believe the time he and Doc Anderson got lost in Northwood while delivering meals. He enjoyed many hunting and fishing trips with dear friends and vacations with family members. Paul traveled extensively, including trips to England, Norway, and Sweden, and throughout North America with highlights including Alaska, Hudson Bay, Yellowstone, and Whistler. He was known to everyone as Uncle Paul, and loved having “lunch” with anyone who stopped by. For years, his Saturday tradition was to bring donuts to his sister’s house where many gathered for fellowship. He loved trips to the highway with family and friends to eat Junior Whoppers from Burger King. “That place is a gold mine,” he would say. Paul’s most favorite pastime was spending time with family, including his brother, sisters, nieces, nephews, and all the great and great-great nieces and nephews. His family gathered at his house frequently, and December 23 was the highlight of the season as his house would fill with 60+ relatives to celebrate Christmas and eat oyster stew. He loved Christmas so much, he once left his Christmas tree up for four years. Paul’s final years were spent living at the Lutheran Retirement Home in Northwood. His family is forever grateful for the incredible care he received during his time there. Paul’s endearing character was with him until the end, and the nurses and staff held a special place in his heart as they shared in his humor and stories. Paul is survived by a sister, Rosine Johnson of Seattle, WA; nephews Reverend W. Paul Weeg (Margaret) of Northwood, Dr. David (Karen) Hanson of Mason City, John Weeg of Shoreview, MN, Mark (Stacy) Davidson of Northwood, Steve (Brenda) Davidson of Northwood, Dr. Michael (Michelle) Johnson of Sheboygan, WI; nieces Mary (Fred) Kueffer of Shoreview, MN, Kathy (Jim) Hanson of Northwood, Karen Davidson of Northwood, Diane (Kevin) Conlin of Northwood, Becky (Tim) Johnson of Seattle, WA; along with numerous great nieces and nephews, and great-great nieces and nephews. He was preceded in death by his parents, sister and brother-in-law Rebecca and Warren Weeg, brother and sister-in-law, Harold and Betty Hanson, sister and brother-in-law Ruth and Marvid Davidson, brother-in-law David Johnson, and a great nephew, Will Johnson.