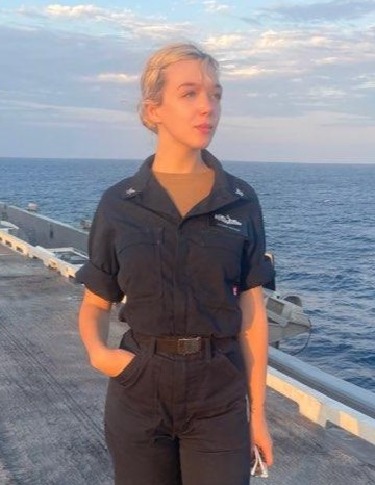 Interior Communication Electrician Petty Officer Second Class Natasha Huffman was born on December 8, 1997 in Protivin, Iowa. She graduated in 2016 from Crestwood High School and enlisted into the United States Navy on July 11, 2018. She reported to Recruit Training Command Great Lakes prior to being assigned to the USS George Washington (CVN 73) in May 2019. Natasha was initially a member of Combat Systems in CS-8 division prior to joining V-2 division within Air Department in December 2019. She took time to mentor others and was an integral member to the V-2 team. She worked on visual landing aid equipment, sound powered phones, 1MC systems and television access for the crew. Her technical skills and hard work ensured the restoration of clear communications on all watch stations on all four catapults to 100\% operability. She continually pursued her rating and shipboard qualifications, earned her Surface Warfare Specialist pin, the Team Leader Damage Control qualification and was certified in NAVSEA Cableway to ensure proper system installation onboard. In addition to her lasting contribution to USS George Washington, she supported the USS Abraham Lincoln during predeployment underway periods. Natasha was dedicated to bettering herself, her peers and the world around her. She served enthusiastically on the George Washington Heritage Committee, organizing events for Black History Month. In her free time, she volunteered over 150 hours of her personal time to Newport News American Society for the Prevention of Cruelty to Animals. Natasha touched the lives of each person she met while in the Navy, and her presence is greatly missed. She was preceded in death by: grandfather, Gordon Huffman; grandparents, Fred and Glennis Krull; uncle, Kenneth Krull Natasha is survived by her mother, Kathleen Krull; father, Brian (Christina) Huffman; grandparents, Wilbur and Mary Puettmann; brother, Josh Huffman; sister, Aleesa Huffman; two step sisters, Stephany and Tara; numerous nieces, nephews, aunts and uncles. Memorial service will be held on June 25, 2022 at 11:00 am at the Riceville United Methodist Church, Riceville, Iowa, with Rev. Paula Hemann officiating. A visitation will be held at the church for 10:00 to 11:00 that morning. Burial will be in the Riverside Cemetery, Riceville, Iowa.