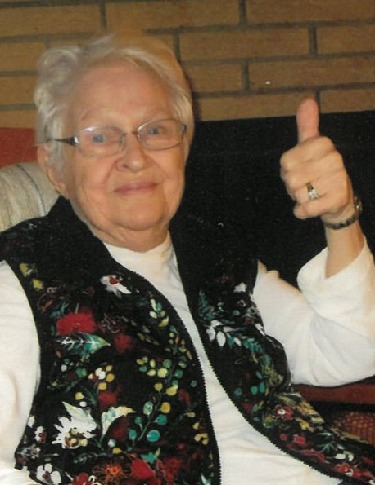 Ramona (Blanck) Morse, 97, of Osage, IA died peacefully on August 30, 2022, with her family by her side. Visitation service will be held Friday, September 23, 4-6PM at Champion's Funeral Home in Osage. Memorial service will be Saturday, September 24, 10:00AM at the United Methodist Church in Osage. Ramona was preceeded in death by her husband of 69 years, Galen Morse. By her daughter, Mary Gilbert. Her parents, her five siblings, two neices, one nephew and countless friends. She is survived by her daughters Becci (Jim) Havig and Pat (Stephen) Gund. Son-in-law Mike (Geri) Gilbert. Grandchildren Troy Havig, Katie (Justin)Alumbaugh, Andrea (Brian) Kwong, Samantha (Mike) Palumbo, Michael (Stacy) Gilbert, Anna (Rick) Aumann, twelve great grandchildren, two great great grandsons, five nieces and one nephew. Ramona was born in Fairmont, MN on July 26, 1925 to George and Hazel (Gideon) Blanck. She grew up in Charles City,IA surrounded by love, laughter and the scent of freshly baked bread. She married her high school sweetheart, Galen Morse, on May 19, 1946 when he returned from serving in WWII. Ramona and Galen along with their three young daughters moved to Osage in 1955 when they purchased the Osage Cleaners. They fell in love with Osage and never left. For many years Ramona worked for the Osage Community Schools first as library assistant then as secretary in both the High School and Junior High offices. She was awarded Secretary of the Year in 1984. Ramona began writing poetry when she was in her mid-fifties. The combination of her creative and intelligent mind, keen observational skills and quick wit produced hundreds of poems ranging from humorous to poignant. Many of her poems were published and several won awards. In 1992 Ramona was one of four founding members of The Alpha Writers writing group of Osage. The relationships and growth nourished in this group gave her much joy. Ramona made life fun. She approached each day with positivity keeping her eyes and heart open. She savored life; enjoyed it completely. She was attentive to those around her whether they be closest friend or stranger. She made the world a better place just by being in it. Oh, what a mighty woman wrapped up in such a tiny frame. She will be deeply missed. The family wishes to thank the staffs of Apple Valley Assisted Living and Faith Lutheran Home for their care in the last segment of Ramona's life. She felt your love and it helped. In Lieu of flowers memorials may be directed to the family. Champion Funeral Home, Osage, 641-732-3706,