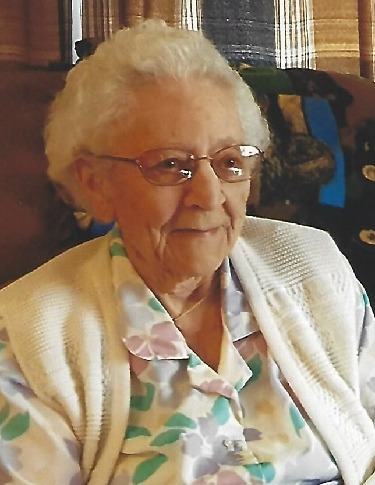 Esther Pauline (Halbach) Klapperich (May 3, 1924 – August 27, 2022) Esther Klapperich was born May 3, 1924 to Anton and Gertrude (Simon) Halbach in Stacyville, Iowa. She was the youngest of seven children and was raised on a farm on the edge of town. Growing up, Esther helped with farm chores, and participated in school and 4H activities. She graduated from Visitation High School in 1941, then worked in her sister and brother-in-law’s restaurant. When she turned 18, she and her sister, Betty, traveled to Washington, D.C., where she worked as a secretary for the Department of the Navy during WWII. It was during this time she began her courtship with Lawrence Klapperich. They were married January 23, 1946 and lived for a short time in Illinois. They soon settled on the family farm west of Meyer, Iowa, where they raised 5 children. She was a member of Sacred Heart Catholic Church and Christian Women’s Society in Meyer. She was also an active member of the American Legion Auxiliary in Stacyville. Esther worked for many years at the Monitor Review newspaper office in Stacyville as a typist. Lawrence and Esther moved from the farm to an acreage by Meyer, and then to a house in Stacyville, which was their final home until entering the nursing home. In retirement, they enjoyed yearly trips to Montana to visit sons Owen and Barry. Esther was a proud mom, grandma, great-grandma, and great-great-grandma. She loved her babies! She is survived by her: children, Owen (Leola) Klapperich of Kalispell, MT, Rosalie (Dave) Shubert of Austin, MN, Reid (Barb) Klapperich of Stacyville, Dorette (Leonard) Fravel of Cresco, IA; daughter-in-law, Beverly Klapperich of Whitefish, MT; 9 grandchildren, 8 great-grandchildren, 3 step great-grandchildren and one step great-great-grandchild. She was preceded in death by her husband, Lawrence, granddaughter, Julie Klapperich, parents, brothers and sisters, daughter, Judy at birth, son, Barry, and daughter-in-law, Linda Klapperich. A memorial service will be held September 10, 2022 at Sacred Heart Oratory in Meyer, Iowa. A visitation will start one hour prior to the service.