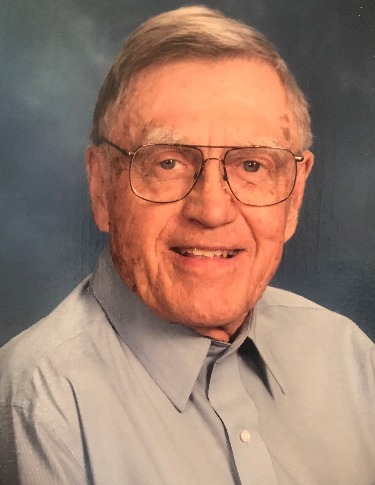 Kenneth Johnson, 84, passed away on Wednesday, August 31, 2022 at the Lutheran Retirement Home, Northwood, IA. A family graveside memorial service will be held in Deer Creek Cemetery at Carpenter, IA. Ken was born to Lloyd and Minnie Johnson, who farmed east of Northwood. He attended a one-room schoolhouse in Deer Creek Township for his early education and graduated from Northwood High School in 1956. Upon graduation, Ken attended Brown Technical Institute in Minneapolis. He became the “Morning Man” news and markets radio announcer at a station in La Crosse, WI. On Valentine’s Day 1959 he proposed to Marjorie Hill, a Manly, IA girl he’d met through 4-H in high school. They married later that year. The couple bought a farm on the Iowa side of the Minnesota state line near Lyle, MN. Ken farmed and raised beef, sheep and pigs. In 1970, Ken and Marge moved to his parents’ former home with their two daughters, where he spent the rest of his farming career raising crops and selling seed. Ken had a trademark wit and dry sense of humor that often brought a smile to those around him. Many have seen Ken in local parades and car club gatherings with his 1956 Chevy BelAir and 1950 Dodge pickup. When he was younger, he bowled on a league with the Otranto Hatchery team. He also entertained family on the accordion, doing a nice version of “Lady of Spain.” Among his many interests was public speaking. He went to public speaking competitions in high school and continued using those skills throughout his life. He read Lessons at Deer Creek Lutheran Church, Carpenter, where he was a lifelong active member. He combined his sense of humor and public speaking to create the “Professor Ichabod Cranium” character that he used in humorous skits. Ken had a deep sense of integrity and was very conscientious, kind and caring. His wry sense of humor was great fun to be around. He was devoted to his wife, daughters and grandchildren, who miss him more than words can say. Ken is survived by daughters Sherry Johnson of Saint Paul, MN, Kimberly (Ronald) Olson of Northwood, IA and grandchildren Garrett (Haley Mathews) of Mason City, IA, Mason of Des Moines, IA and Jaleh of Washington D.C. Brother: Phil (Carol) Johnson of Mason City, IA. Sisters-in-law: Sue Hill of Plymouth, IA and Janet Kreb of Cedar Falls, IA. He is also survived by many nieces, nephews and cousins. Ken was preceded in death by his parents and wife Marjorie, as well as sister-in-law Carolyn Jackel and brothers-in-law Byron Hill, Harlan Jackel and Francis Kreb.