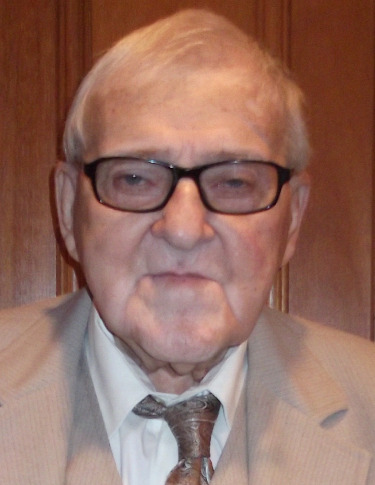 Vallejo "Joe" Bullis, formerly of Osage, went to be with his Lord and Savior on Wednesday, December 9, at St. Ansgar's Good Samaritan Home, at the age of 95. Graveside services will be held at 10 am on Saturday, December 12, at the First Lutheran Cemetery in St. Ansgar. Joe was born August 21, 1925, at Nashua, the son of Monroe Bullis and Clara (Keith) Bullis. In 1932, the family moved to St. Ansgar. Joe attended the St. Ansgar schools and graduated in 1943 and then attended Iowa State University. Joe was called into military srvice and served his country from 1943 to 1946, during World War II, in the 741st Military Railroad Battalion. Joe served as a fireman on the steam engines and then as an engineer. Joe married Katherine Rust in September of 1947 at The Little Brown Church in Nashua. Three children were born to this union: Ronald Bullis, Nancy Bullis, and Susan Bullis. The family moved to Osage in 1954, where Joe had a lifelong business of selling and servicing appliances. Joe was an aviation buff and enjoyed flying his airplane and hang glider. Both Joe and Katherine loved to travel, especially their trips to the Holy Land. Among those left to cherish Joe's memory are his daughter, Susan Bullis of Mason City, his nieces and nephews, and friends. Joe was preceded in death by his parents; brothers Thurlow Bullis and Reginald Bullis; sister Maybeth (Bullis) Raeburn; daughter Nancy Bullis in 1984; wife Katherine Bullis in 2007; and son Ronald Bullis in 2018. May God bless Joe's memory.